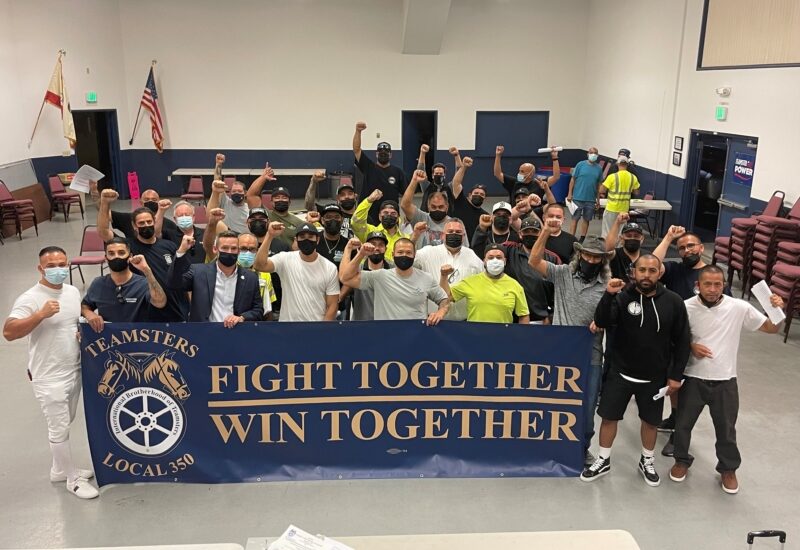 On September 14, 2021, the 138 members employed at the Waste Connections company, known as GreenTeam of San Jose/West Valley, voted by a 93% margin in favor of a new five-year collective bargaining agreement. Under this agreement, there are two units with their own set of past practices and procedures. The GreenTeam of San Jose members provide recycling and garbage services to the City of San Jose. In contrast, the West Valley Collection & Recycling provides complete recycling green waste and garbage service for the cities of Campbell, Monte Serano, Saratoga, and the Town of Los Gatos.

The negotiations were led by the President of Teamsters Local 350, Sergio Arrañaga, with the assistance of the three elected bargaining committee members, Brother Ralph Ascenco, Brother Daniel Medina, and Brother Jesse Muniz.

“Going into bargaining with a company as large as Waste Connections has its challenges. Due to the unprecedented times we currently live in, it was important to make sure that we as a Local Union took care of our front-line workers. To prepare for these negotiations, we made sure that we did some political groundwork to ensure the support of the electeds for our members in the event." President Arrañaga continues, “From the beginning of the pandemic, these essential workers were asked to step up and work every day, and sanitation is pivotal to the infrastructure of our society."

“It was refreshing to go into negotiations and recognize early on that there was no time for posturing between either side and the issues that we heard during our proposal meeting, wages, maintaining their Health & Welfare and pension to name a few, were addressed and hammered out with good discussion and significant improvements at the end. These improvements will give our members the comfort of knowing that they will be able to maintain a good quality of life for themselves and their families."

The diverse bargaining committee, which had a veteran driver in the latter stage of his career, a member who is at the launching point of their career, and a mechanic who keeps the trucks rolling on a day to day basis, ensured that there was a well-balanced voice and that no issue was left unheard.

Brother Ralph Ascenso, out of the West Valley side, described the process as “very educational" and came out with a better understanding of how things work. “As a tenured member, health and welfare was a huge focus for me, and I think we accomplished something that can benefit us all. The insurance, pension, and wage agreement that we decided on are some of the best within a contract I’ve seen in my 30 years in this industry."

Brother Jesse Muniz, the mechanic on the committee, said the following, “For my first time going through the negotiation process, I’ve learned how much more important it is to have a union and to be part of a union. When sitting at the table, just trying to have your voice heard just to be turned down with no explanation was an eye-opener. Without the union to guide us and fight for us, we wouldn’t have, in my opinion, the best contract we have ever had. We have now set the bar for the south bay! We gained more than we have had and lost nothing. One of the biggest gains from the negotiation is getting retro back pay, which was the first time the company has had this in a long time. It’s important to have stewards that our members can rely upon or go to for help when trying to understand the contract, and I’m proud to be a steward. I will continue to learn how to be better one day after day to help protect my guys and fight for them when needed. “Where there is unity, there is always victory!"

Out of the GreenTeam of San Jose unit was Brother Dan Medina, “First off… I want to thank Sergio, John, and Robert for their outstanding job in our negotiations! They fought hard to keep everything we had and to improve what we had! Thank you, Ralph, for keeping vocal as always. I believe this is a good contract, and I stand behind it."

Teamsters Local 350 was chartered on October 8, 1936, in San Francisco and represents over 2400 members in the solid waste & recycling industry, linen, and public sector divisions.