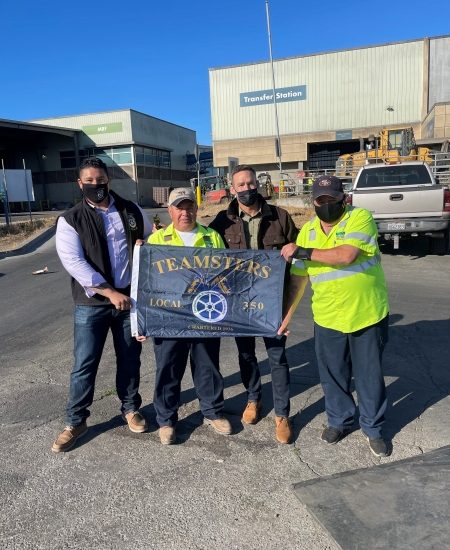 Today, the forty-two-person South Bay Recycling Facility Operations unit in San Carlos voted to approve a historic new five-year deal. These essential workers are responsible for the day-to-day operations at the Shoreway Environmental Center which encompasses both the Transfer Station and the Material Recovery Facility (MRF), both of which are open to the public and provide residents, businesses, contractors, and
individuals to bring their trash and recyclables for processing and transfer. The classifications in this unit range from equipment operators, scale attendants, mechanics, spotters, and sorters, while also working alongside
fellow Teamsters Local 350 drivers from Recology San Mateo.

“I am proud to say that after a long negotiation process, we were able to attain worker protection language that nowadays is a bit unprecedented. During the middle of the COVID-19 pandemic last year, South Bay Recycling laid off several of our members, causing a massive health and safety risk, not just for our people, but for the general public as well who utilize this facility.” says lead negotiator and business representative Robert Sandoval “Thanks to the grievance process and support from our political allies, we were able to bring back all those affected, but we wanted to make sure that our members would never be put in that position
again. That is why we made it clear to the employer from day one that our group would not authorize anything that did not include some form of no lay-off language. Safety and staffing go hand in hand for this type of work, and while it was a battle, our members prevailed”

In addition to the no lay-off language, the members retained their full maintenance of benefits, and will see a significant increase in wages and pension over the five years of the agreement. “We laid out our priorities as the membership directed us, and came out with a new contract that sets the bar for the area standard in San Mateo County for workers employed at a transfer station or material recovery facility. All our members throughout the Local Union have continued to work during this pandemic. This group in particular, who deals with the public and their fellow brothers and sisters deserve nothing less than what was negotiated
in this contract.”

One of the driving forces in this process was negotiating committee member, shop steward, and executive board member Brother Joseph Gomes.

“I’d like to thank Local 350, specifically John Bouchard, Robert Sandoval, Larry Daugherty, and Serio Arranaga for their support and collaboration in a strong and lucrative contract. I’d also like to thank the South Bay Recycling members for the unanimous support and confidence in the Union to negotiate the best contract on our behalf.”