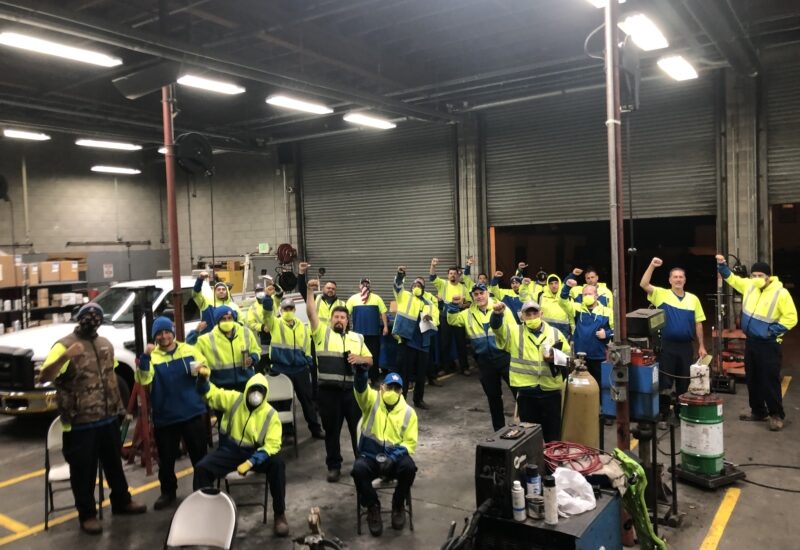 On November 30, 2018, members working for the Republic Services/Allied Waste Services of Daly City bargaining unit unanimously ratified a new five-year agreement. The contract is unique, considering that it had a re-opener solely for wages and pension for the final four years. After many hurdles, delays that were out of the control of both Local Union and Republic Services, Local 350 was able to present a finished product to the membership, which resulted in another unanimous ‘yes’ vote on June 23, 2020 to approve the new wages and pension increases.

“For years, four companies in the northern part of San Mateo County have made less than the rest of the county.  Our members in Daly City were no longer willing to accept that and led the charge for pay equity in San Mateo County, and this contract is the result of their fierce determination. They were pioneers in that regard, and their efforts prompted another company in the area to do the same.  Our committee members, Luis Estrada and Ignacio Miranda, never took their foot off the gas, making sure we knew at all times that their brothers would accept nothing less than what they demanded.  There is still work to be done for other companies, but when we get similar contracts for the remaining two companies, these members in Daly City will deserve the credit for it.  This is also a testament to our efforts politically because we wouldn’t have accomplished this without the invaluable help of our Political Director, Trish Suzuki-Blinstrub.  It was truly a team effort, and it paid off big time for our members!” said Secretary-Treasurer John Bouchard

The thirty-three member unit had been extraordinarily patient and confided in the Local Union to follow-through in its promise. The increase which retros back to June 2019 and April 2020 saw an almost thirteen percent increase combined in wages, which raised them to the area standard and substantial raises in the ensuing years to maintain parity..

After the vote, a member who remained to be anonymous stated, “This is the best contract we’ve ever had. We were scared that with COVID-19 and the economy tanking – that we weren’t going see the increases we were promised, but it was worth the wait. I’m glad our representatives continued to fight for us, and I am happy and extremely grateful.”