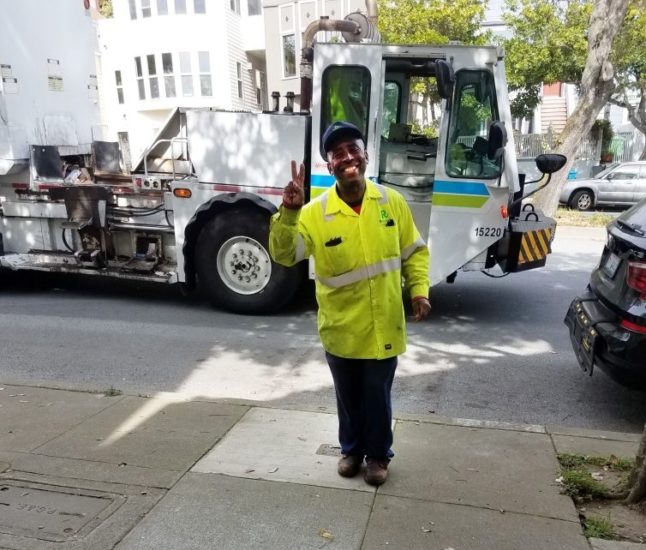 Bernard Lewis – A Boy from Bayview

Brother Bernard Lewis out of Recology Sunset was featured in a great article authored by Judy Goddess of SFSeniorBeat.com. The article goes into detail about how and when he started his career and his passion to service his customers.

Bernard Lewis walked to his car, opened the door, unlocked the glove compartment and pulled out a Ziploc bag. “These,” he said, “are some of the letters and photos my customers sent me.” Crayoned notes from young children, photos of smiling families on vacation, ‘thank you’ letters. He handled them carefully.

Lewis drives for Recology Sunset Scavenger, operating one of those one-person trucks that picks up and empties the blue recycling bins. This September marks his 20th year, which means he is eligible for retirement. Though he’s 61, he’s not so sure about that step. “They’re like my family,” he said, raising the plastic bag. “I don’t know what I’m going to do.”

Recology has no mandatory retirement policy, but the ability to retire feels like it’s come up fast. The decision is “creeping up on me,” he said, before mentioning that one driver didn’t retire till he was 80. “I feel like I still have the energy of a 25-year-old,” he said. “I don’t see any signs of slowing down.”

Although he bought a home in Las Vegas for retirement, moving would mean leaving his customers, some family and his friends.

A boy from Bayview

Lewis grew up in the Bayview district of San Francisco. He attended neighborhood schools and the Boys’ Club and went on to study culinary arts at City College of San Francisco. He’s from a family of five boys – two died, one from gun violence – and three sisters. His mother, “a strong lady,” still lives in the Bayview. There isn’t a day that goes by he doesn’t talk with her.

Lewis worked at Zim’s, a small, popular restaurant chain, for about five years, and then in the laundry at San Francisco General Hospital. When the children started coming, he needed to make more money. A friend alerted him to an opening at Sunset Scavenger, now Recology. “I didn’t think I could pass the exam, but my buddy said he’d put in a good word for me.”

Sunset required drivers to have a Class B license and two years of experience driving a shuttle. Lewis applied for the license, put in the time, went for the interview and a driver’s test, and waited. “I prayed about it. When they called to tell me I had the job, I cried. It was a blessing. They gave me an opportunity.” Lewis was 42 at the time.

Initially, Lewis worked on a two-person truck. “There was a lot of scurrying around, like ants.” It’s easier now. The garbage hauling business has changed. Hydraulic lifts lift and empty the can into the trucks. In flat neighborhoods, with wider streets, one person can handle the job.

It’s still a hard job, particularly for an older guy, he admits. But Lewis stays in shape. “It’s a fun job, and it keeps me in great shape, physically and spiritually. I go to the gym every day and work out.”

Retiring would be hard, he said. “It’s the best job I’ve ever had. The customers keep me going. Little kids shout out my name when I drive up. Some of my older customers call me their alarm clock because I wake them up.

‘Pointers on how to live’

“One thing about driving a truck, you meet all kinds of people and you develop great relationships. We talk. My customers give me pointers on how to live.”

Lewis stopped by recently to say Happy Birthday to John Burns, one of his favorite customers, who had just turned 101. Lewis used to stop and walk with her Dad, said Burns’ daughter, Hope. One time, when a couple of weeks went by and her Dad hadn’t come out to see him, “Bernard rang the bell and asked what happened.” It turns out 98-year-old Burns had run off to catch a bus to a senior center where he volunteered, and tripped. These days, he is confined to a wheelchair.

The joy of developing friendly relations with customers also has a downside. When Lewis loses a customer, it’s personal. “One hard thing about driving a truck and getting to know the people, you see them die. I didn’t think like this when I started the job. How precious life is.”

And yes, there are hard days, he said as he weighed the pros and cons of retirement. “When it rains, my socks get soaked and the water runs down my back. But I’m so grateful for the job. You do what you got to do.”

‘Stay smiling’ and people may change

Sometimes, when he’s driving slowly up the street and making frequent stops, a driver flips him off. “I understand their situation. If you stay smiling and spiritually connected, they may come to change their ways. I’ve worked since I was 16, I don’t know what it would be like to not work. I might stay on and teach young people about the work ethic.”

Another reason to stay on the job? It pays well. Drivers are members of the Teamsters’ Local 350. Recology also has an employee stock ownership plan, which means that when he does retire, he’ll receive shares from his account – on top of his pension and Social Security. “It’s a well-run company,” Lewis said. “Management sticks by you. It’s one of the greatest companies you can work for.”

In return, Lewis believes in “giving 500 percent for myself and the company. I take pride in my job and strive for greatness. And I’m still as motivated as the day I started. The company has to be pleased with me or I wouldn’t have lasted 20 years.” 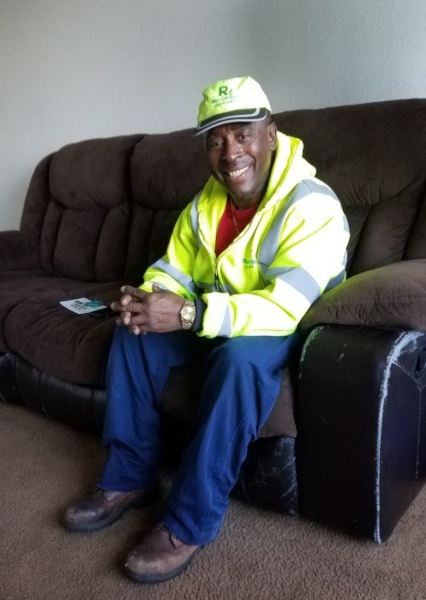