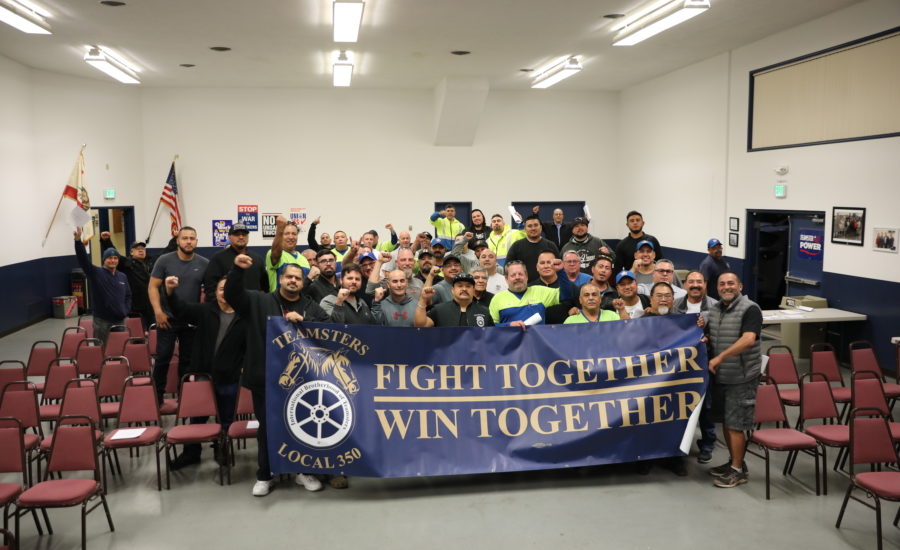 After months of negotiations and nation-wide actions against the greed of Republic Services, Teamsters Local 350 members at Allied Waste Services of Santa Clara voted unanimously to ratify a new five-year contract. Among the various improvements were the substantial increases in wages and pension these members will gain over the life of the agreement, maintaining full maintenance of benefits, and the protection of adequate staffing levels that Republic Services sought to eliminate.

The group of 87 drivers and mechanics that work out of Republic Services operated Newby Island Resource Recovery Park, which encompasses both the landfill, recyclery, and hauling operations. Along with these members, Local 350 represents the clerical unit and the material recovery unit at this location, which is one of the largest landfills in the San Francisco Bay Area.

Bargaining began back in June of this year, and after several meetings there was little to no movement on wage compensation that matched the area standard. On a nation-wide level, Teamsters in the Solid Waste & Recycling division were actively taking actions to combat the unwillingness of Republic Services to compensate its workers. When Teamsters Local 25 in Boston, MA extended pickets, Teamsters Local 350 members, along with Teamsters Local 315 and Teamsters Local 70, who dump at this location, held the line. Ultimately, this group of members voted unanimously to authorize a strike back on September 21, 2019.

“Negotiating with Republic Services is not an easy task. The strength comes from the membership who work at this facility.  When Teamsters Local 25 extended pickets into Newby Island for 12 hours, all members at this facility and all our Teamster represented units upheld their union and labor principals and chose not to cross the picket line. This gave our members the courage to give a unanimous vote for strike sanctions if they did not get what they wanted. These members understand they work in the 11th largest market in the nation and in California, which is the 6th largest economy in the world. Our members knew that a shutdown would have a significant impact at Republics facility at Newby Island. This was a critical factor in negotiating a robust economic package and language protection for our members. “ said President and Lead Negotiator Sergio Arrañaga

An integral part of the negotiating process was Brothers Javier Barragan, Brother Mike Mulder, and Brother Conrad Lacanale who, combined, have over 80 years of experience in the solid waste industry.

“Back when this unit unanimously authorized strike sanctions, I said I wanted Republic Services to hear this message loud and clear. Our members were not going to accept anything less than the area standard and were prepared to do what was necessary. Clearly, Republic Services heard the message as we were able to provide a compensation and pension package in front of the membership with a 100% yes vote. I am proud of our members for being an embodiment of our motto: Fight Together, Win Together.” Said Secretary-Treasurer and Principal Officer John Bouchard.